Never mind that I said we would not get another dog until our old dog passed on to another life.  Never mind that I promised the next time we got a dog, it would never get on the couch, sleep in the house, or eat table scraps.  Never mind that I said I could never like a new dog as much as our 11 year old Scout dog.  Never mind all of that because when I met Uno for the first time, all of those things I said I would or would not do, suddenly meant nothing.  He was so cute, so sweet and cuddly and endearing, that all the promises I had previously made faded like my summer sun tan.  Within moments of meeting Uno, I was smitten.

And so were Jackson and Mabry.  David and I decided to let the kids be somewhat in charge of the process of getting a new dog so we began by researching different types of dogs.  We talked about the things we liked and didn’t like in different breeds and then we planned a trip to two local shelters.  We said we were going to “look,” but we all know what that is like.  Yes, I knew the morning that they headed to the shelter that we would likely have a new pet by the afternoon.  Turns out I was right.

My son was the first to spot Uno.  He was curled up on a dog bed in his own little room at the shelter.  They were initially drawn to his small size I think, but pretty soon they fell in love with his sweet personality.  In fact the word “sweet” is what they kept using over and over again to describe him, even stating boldly that he was as “sweet” as their cousin Mary Mae, which is saying a lot.

The sweet little puppy came home with us that day and has been a delight (most of the time) to have around.  He is far from house trained and he chews up anything he can sink his needle teeth into, but he is learning and is getting better each day.  The kids are learning too.  Already they have learned about the difficulty in training a puppy.  They have learned a bit about puppy anatomy (the puppy was neutered when we got him), and they have learned the joy of playing with a puppy.

We named the scrappy labrador/hound Uno because he was the last of his litter to get adopted.  That and the fact that we love the card game Uno.

And as it has turned out, the name Uno has even more meaning as we all agree that Uno is truly the “one” for us!

1/4 cup plus 2 tablespoons all purpose flour

Halve one third of the tomatoes.  Stir halved and whole tomatoes, both cheeses, basil, and flour into shallot-zucchini mixture.   Season with salt and pepper.

Spread filling into pie dish and cover with foil.   Bake for about an hour then remove foil and bake for another 15 minutes. 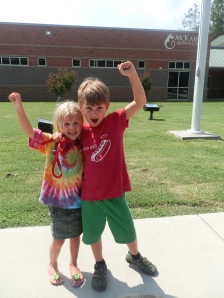